Raising a water turtle is a beautiful and delicate craft. More than keeping the tank clean and the water fresh, you may fancy adding other animals to your turtle tank. The commonest options that come to mind here are fish and snails. Talking specifically about the latter, are snails really good for turtle tanks?

Yes, you can add snail to your turtle tank. Aside from being a nutritional source for your turtle, snails contribute to the hygienic upkeep of the tank. Snails eat leftovers from your turtle that would have contaminated the tank and even reduce your tank’s algae content. Also, given the relatively slower rate of snail reproduction, you can be confident that the snail population of your tank will not burst out of control.

As we will learn down this guide, turtles and snails can coexist. Still, there is a definite possibility that the snail (depending on its size, the turtle’s temperament, and dietary preferences) could end up eaten by the turtle. Chill, I will tell you more about this.

Sorry, I can’t guarantee your beloved snail will die of old age in your turtle tank, haha. The thing is, turtles savor snails.

A turtle that has been dominantly raised with animal protein would prey on snails in its tank with the same predatory enthusiasm it hunts critters.

In the latter part of this guide, I will tell you the conditions under which a turtle and snail can peacefully coexist in one tank.

Yes, baby turtles – just like their juveniles counterparts – can still eat snails. Characteristic of younger snails, they love animal protein and will eagerly chase down a snail they can eat.

But baby turtles will steer clear of bigger snails like the agate snail. Being young and fledgling, you can expect the baby snail to limit its snail hunting to smaller (and moderately sized) snails.

In the case of really young baby turtles yet to significantly develop, they could struggle to chew the snail’s shell. In such a situation, the turtle would gobble the edible part of the snail, expelling the shell.

Can Snails And Turtles Live Together?

The possibility of a snail and a turtle cohabiting in the same tank essentially depends on the interior design of the tank and the turtle’s behavior and feeding regimen.

Take, for example, you have an aging turtle in the tank. Its carnivorous urgings would have reduced as it transits from animal protein to a predominantly plant-based diet. This means a shrinking possibility of your turtle preying on the snail.

Also, you can increase your snail’s chances of survival if the tank’s interior can be decked with crevices and submerged rocks. These would provide the snail hiding space from a prowling turtle.

Altogether, if you are comfortable with the fact that a sizable fraction of the snails you put in your turtle tank will get eaten, then you can keep snails in. But if you have one special snail you are sentimentally bonded with, don’t leave it in your turtle tank.

Are Snails Dangerous to Turtles?

It is worth noting that adding snails to your turtle tank exposes the turtle to parasites. It is a known fact that snails are involuntary hosts of pathogens and parasites.

But this depends on where the snail was sourced. Wild snails could carry lung fluke and other parasites that pose health risks for your turtle. But if you can acquire live snails from a reputable pet store, your chances of turtle infection (from the snail) shrinks.

What Will A Snail in a Turtle Tank Eat?

It is fair your aquarium snail has something nourishing to eat – at least before it is eaten. While your snail can source its food from your turtle’s leftover, it can also make do with algae.

You can feed your snail algae wafers you procured from the store, or your snail can eat the algae that naturally develop on your turtle tank’s walls.

Regarding the quantity, you would gradually optimize the rations to their consumption rate. Feeding your snail two times a day (provided the meal routines are reasonably spaced) is cool.

If the food you feed your snail stays more than 48 hours untouched in the tank, then chances are the snail is being overfed.

How Can You Know Snail In A Turtle Tank Is Alive Or Dead?

Identifying a dead snail can be tricky for most turtle tank owners. Snails have this curious habit of floating on top of your turtle tank like they are dead.

If you notice such floating behavior, it is unlikely your snail is dead. Snails float in that manner if they have a gas bubble stuck briefly under their shell. You don’t need to do anything about this. Your snail would naturally withdraw back out of its shell.

Aside from the distinct smell of putrefaction, another way to tell if a snail is alive or not in your turtle tank is its response to being agitated. If you notably hit the wall of the tank section where your snail is, it should quickly retreat into its shell if it is still alive.

If the snail is dead, it will remain outside its shell, hanging lifelessly. You can inspect further by gently tapping the flap, precisely where the snail’s shell locks.

If the shell doesn’t open, and the snail doesn’t fight back, the snail is likely dead and should be disposed of from the turtle tank.

What Type Of Snail Can You Keep In A Turtle Tank?

Not every kind of snail would survive living in a turtle tank. A good snail choice would enhance the freshness (and hygienic state) of the tank water by clearing (via feeding) algae and other loose materials like dead fish and plant materials.

Commonly, three types of snails would thrive best in the ecological conditions of a turtle tank.

You Can Keep The Apple Snail In Your Turtle Tank

The Apple snail is one mollusk that naturally thrives in tropical climes. The Apple snail will survive in your turtle tanks courtesy of its underwater breathing capacity. This can be attributed to the Apple snail being furnished with a siphon organ, resembling a tube.

The Apple snail has a distinctive look, with a color spectrum running through yellow to black. You can readily identify it by its extended tentacles and remarkably round shell. The Apple snail has eyes on both sides of its mouth. They can grow up being 6 inches wide.

Unless your turtles eat it or it dies from illness, you can expect the Apple snail to live from two to five years if you adequately take care of it. The Apple snail is more active during the night.

Take note that the Apple snail’s activity levels rise with the turtle tank’s temperature. Anything higher than 80 degrees Fahrenheit and you can be expecting increased reproduction activity among your snails, resulting in snails overpopulating the tank. An inconvenience your turtle may interpret as threatening its sovereign borders.

If you want a sizable population of snails in your tank in no time (giving your turtle enough to feed on), you may consider the Malaysian Trumpet Snail.

This snail population can aggressively multiply in your tank, courtesy of its being a hermaphrodite. Well, if you want to suppress the population, then make sure not to overfeed them.

The Malaysian Trumpet has minimal maintenance needs. Aside from algae, it can thrive on dead fish and plant materials.

And if you were wondering what the Malaysian Trumpet Snail looks like, it is dressed in a shell carved into a sharp cone. The shell is striped with dark markings interspersed with a grayer body. Malaysian snails barely grow longer than an inch.

Of Course, The Nerite Snail Would Still Do For Your Turtle Tank

The Nerite snail has a thick amber coloration further enhanced with dark bands. The Zebra is among the most buoyant types of Nerite that would befit such an aquatic setting.

If you don’t fancy an explosion in your tank snail population, the Nerite is a good choice. This is especially considering that the Nerite snail placed in freshwater loses its reproductive capacity.

The Nerite snail rarely lasts longer than 24 months. For food, pellet fish, flake, or algae would do. This snail doesn’t grow more than an inch.

How To Care For Your Tank With Turtle And Snail

Keeping a snail in your turtle tank will not dramatically keep your tank hygienic 24/7. There is still some maintenance regimen you need to keep up with on your end.

Putrefaction of such food materials will spike the ammonia content of the water, making it toxic for both snails and turtles. Therefore, make sure to vacuum the tank bottom at least once every week.

To further shrink the ammonia content of your turtle tank, you can add floating freshwater plants. These plants can suck up such ammonia as nourishment.

Aside from such a vacuuming regimen, ensure sterilizing the tank’s water content with UV light periodically. This is efficient in preventing an unhealthy accumulation of dangerous free-floating pathogens in your tank.

What Should You Never Add To Your Turtle Tank

Yes, we have efficiently safe-listed snails as excellent additions to your turtle tank. But not just any animal should be dumped into your tank to cohabit with your turtle.

When picking a tank mate for your turtle, ensure the creature doesn’t secrete dangerous chemicals into the water which may harm your turtle. This is typical of the generality of amphibians that secrete toxic substances from their skin.

Don’t keep other reptiles in your turtle tank. Reptiles are notorious for the significant amount of waste they produce. This can be dangerous for your turtle.

It is a known fact that making your turtle tank a mixed-species turtle habitat is no easy feat. Turtles are not the most accommodating animals.

When you bring together turtles or even the same species together in one tank, there is a heightened propensity for aggression, as seen in fights and maiming scuffles between them.

It is even more violent if you have two males living in one tank with one female turtle. The two males will fight like hell for the female, even as far as killing each other.

More than that, there are special species that are extremely hostile. The snapping turtle is a violent guy and can barely have a tank mate.

Turtles – by their very nature – are ardent competitors. They are territorial and would readily resort to aggression if they feel any creature encroaching into their own space.

To get a turtle successfully living with a tank mate (especially different species), you must ensure the tank is big enough. For you to have two turtles peacefully cohabiting in one tank, the tank must be at least 100 gallons in free space. If you can get as much as 200 gallons, that is much better.

Such extra space should be fitted with visual barricades and hiding corners. This is especially important to protect the weaker turtle from the dominant one. 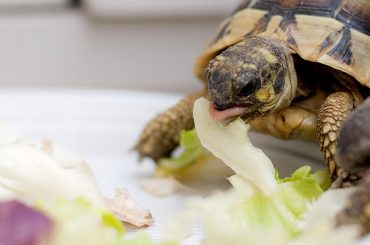 Do Turtle Tanks Need To Be Cycled? (Explained) 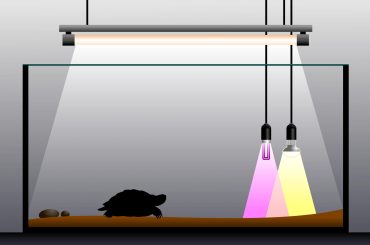 How Much Does a Turtle Tank Cost? (6 Examples) 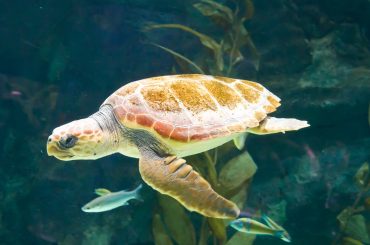 Is Turtle Tank Water Good for Plants? (With Examples)