You will agree a towel’s usability is strongly connected to its absorbency. Whether you are drying dishes, wiping down surfaces, or cleaning up spills, you need a towel that soaks up the moisture eagerly. Now given the seeming essentiality of water absorbency, you may be curious if all towels are absorbent – or even equally absorbent.

All towels are not equally absorbent. Towels made from natural fibers have a higher absorption capacity than towels made from synthetic fibers, although the latter tends to outlast the former. Some of the best towels – as to absorbency – are made from natural fibers like linen and cotton. Overall, the towel’s absorbency is determined by the GSM (grams per square meter rating) rating. The higher this metric, the more absorbent, softer, and heavier a towel is.

Today, there are many types of towels, with variations across material makeup, weaving methodology, and design. Some of the most absorbent towel types include Turkish towels, Bamboo towels, Terry towels, Microfiber towels…Let us look into them, particularly examining how absorbent each of these towels is.

Turkish towels are famed for their Turkish cotton composition. You need not have been long in the world of fabrics to hear about Turkish cotton.

Exclusively cultivated in the Aegean Region, Turkish cotton is reputed for its premium long fiber, absorbency, and longevity.

Consequently, Turkish towels come with thin yarns and loops. In our perspective, they have some of the most delicate yarns compared to other cotton variants.

Generally, Turkish towels have GSM ratings typically above 600. This is a strong indication of how highly absorbent they are.

Bamboo towels are increasingly permeating the market. They are loved for their breathability, durability, eco-friendliness, antibacterial capacities, and, yes, their absorbency.

Bamboo towels soak up really well, with their softness and fluffiness quickly endearing them to users. Bamboo towels either come in pure 100% bamboo composition or combinations of bamboo and cotton.

While we have established that bamboo towels are generally more absorbent (and softer to touch) than cotton towels, cotton towels dry much faster than their bamboo contemporaries.

Also, take note that bamboo towels respond badly to ironing. The more you iron them, the flatter their fibers get, ultimately handicapping their absorbency.

If you want your bamboo towel to be absorbent for longer, iron it only when necessary.

Depending on the material composition, terry towels can be made from 100% cotton or combine cotton with polyester.

Terry towels have magnificent absorbency. This is unsurprising considering that these towels are specially optimized to soak up more moisture.

Fundamentally, terry towels are made of hordes of looped threads, protruding out to catch more water. The denser the loops, the higher the towel’s absorbency, with each loop typically soaking up water exponents of its weight.

This explains why terry towels are the material of choice for making swimming and bathing trunks.

Take note that terry towels with part-polyester composition are not as absorbent as those made from 100% cotton. Most terry towels we have seen have their GSM rating oscillating around 550-650.

Interestingly, microfiber towels can soak up moisture that that 700% of its weight. Their positively charged nature can further explain their capacity to clean surfaces (rid of chemicals). This enhances its capacity to pull in grease and dirt particles that are negatively charged.

That said, microfiber towels are as absorbent as the likes of Terry Towels. While the latter is furnished with natural fibers, microfibers are typically produced with synthetic fibers.

Therefore, their absorbency ratings tend to stay in the low-medium category of 250-350 GSM.

For what linen towels lack in size, they tend to make up for abundantly with absorbency. Its density is admirable, allowing it to give you long enough value for your money.

Linen towels made from 100% premium cotton are hard to beat when it comes to absorbing moisture. Some of these linen towels come at a GSM rating as high as 800.

Waffle towels made a name for themselves in Europe before aggressively spreading across the corners of the planet. These towels have unmistakable waffle designs, closely mirroring honeycomb weaves.

Made from either microfiber or pure cotton, waffle towels are conventionally loom-woven. This design pattern substantially improves these towels’ resilience which beats their chemically produced counterparts.

These towels are decked with a ridged design, amplifying the towel’s capacity to trap dust, solid food particles, and water.

Aside from the weaving pattern, the enlarged surface area of waffle towels contributes to their superior absorbency.

By combining the surface area and the weave pattern, you get a towel that excels at soaking up spillage and moisture and yet boasting remarkable airflow.

Such top-class airflow and breathability make waffle towels some of the quickest-to-dry towels in the market today. These towels disperse moisture 40% faster than terry towels.

Velour fabrics have an illustrious history, originating far back in Lyon in the mid-1800s. Fast forward to today, these fabrics have been primarily deployed in making sanitary apparel like draperies and bath towels.

Velour towels are uniquely soft, shared on a side, and having this distinctive pebbled feel. They have fair absorbency and tend to get soggy when they soak water.

Well, they come second when their absorbency is pitted against the likes of Terry towels. Typical velour towels have their GSM rating around 250-350. However, some luxury velour towels are far more absorbent, with GSM ratings running up to 530.

There you go! We have examined seven of the most absorbent towel types in the market today. Next, let us talk about what really makes a towel absorbent.

What affects a towel’s absorbency?

When buying towels, reckon that producers integrate softeners so their towels feel fluffier and nicer. This doesn’t necessarily mean they would absorb moisture sustainably, as most of the early absorbency is lost with subsequent towel washing. The best absorbing towels are typically made from 100% pure cotton.

That said, the two predominant determinants of a towel’s absorbency are its loop designs and GSM. Conventionally, loops that are more tightly stitched and thicker tend to absorb moisture more.

Of course, we have been particularly hitting on the GSM capacity all day. This is arguably the most important feature to watch out for when choosing absorbent towels.

Towels with lower GSM are thinner, lighter, and absorb less moisture. This is characteristic of towels with GSM around 300-400. They are better suited to trips and athletic deployments (say in the gym).

Towels with GSM ratings around 450-600 GSM are upgrades to the former category. If you need a towel for bathing – say for you or a guest – aim for towels around 500-600.

They are fairly dense and soak moisture efficiently. On the downside, they may not dry as quickly as towels with lower GSM ratings of around 300. 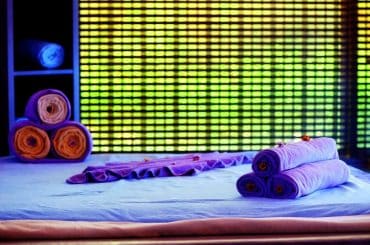 What Are Decorative Towels? (9 Facts Explained) 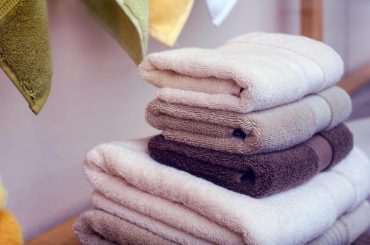 Are Towels And Sheets Delicates? {8 Tips Can Help You} 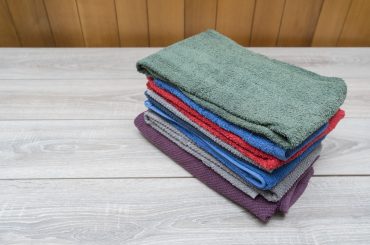 Are Towels Anti-static? (12 Facts You Should Know) 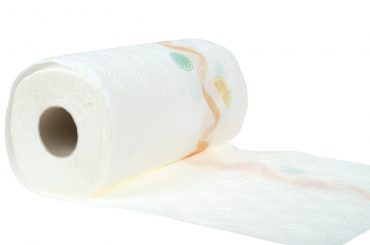 Are Paper Towels Lint-free? {7 Facts You Should Know}